Are you new to us? Click here to learn more. 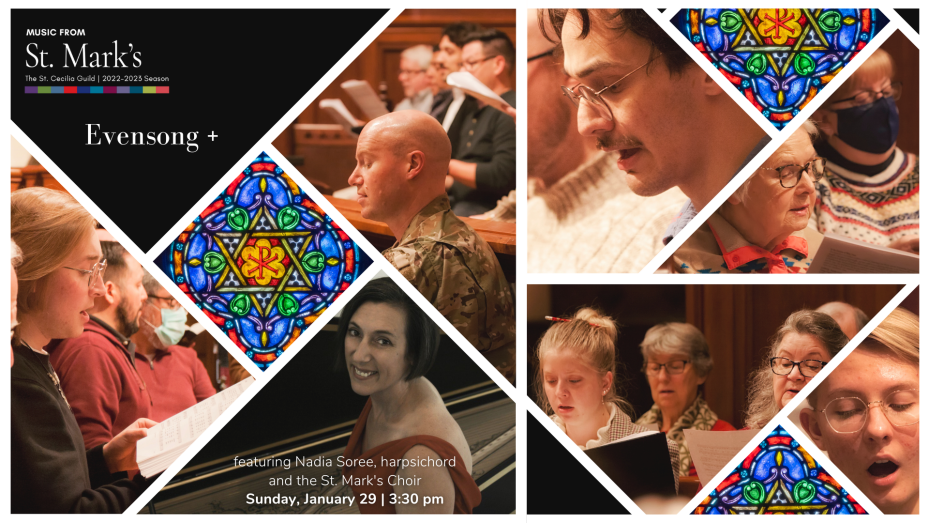 Music from St. Mark’s presents Evensong + with Nadia Bohachewsky Soree, harpsichord, on Sunday, January 29. The afternoon begins at 3:30 pm with a recital by Dr. Soree, followed by Choral Evensong at 4 pm presented by the St. Mark’s Choir.

Soree will pair Uranie (Suite No. 9) by Johann Caspar Ferdinand Fischer with Johann Sebastian Bach’s Toccata in D Major, BWV 912. Both composers were accomplished keyboardists and contemporaries in the first half of the 1700s. While Bach’s accomplishments are widely known and greatly celebrated, Fischer’s contributions are more elusive but no less valuable - he is best known for his sets of suites for harpsichord, which were greatly influential in the development of the genre.

January’s Evensong + is the first in a series of monthly offerings as the St. Mark’s Choir prepares for a two-week pilgrimage and residency in the United Kingdom in July 2023. Music for this service includes the Murrill Magnificat and Nunc dimittis in E, and works by Howard Helvey and Peter Hallock.

Music from St. Mark’s is offered free of charge to the community through the generous support of the St. Cecilia Guild of St. Mark’s Episcopal Church. 315 E Pecan St - free parking available.